Ecological Calendars for the 21st Century 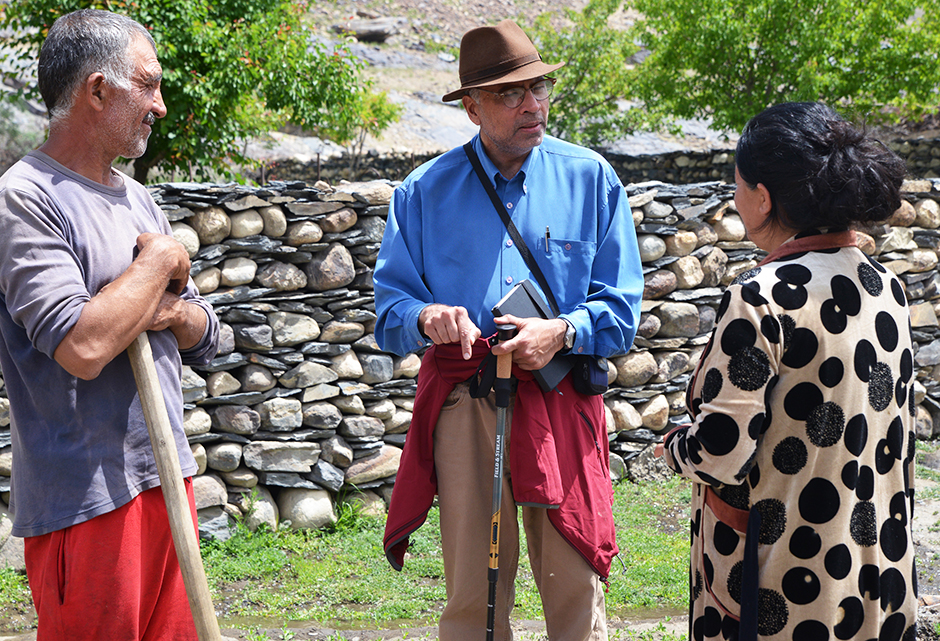 Karim-Aly Kassam (center) inviting villagers in Savnob to a meal before the workshop that would begin the research project. Photograph: Tobias Kraudzun

Forty-eight hours in Kabul, then off to the mountain villages—that was the plan.

Karim-Aly Kassam, International Professor of Environmental and Indigenous Studies in the College of Agriculture and Life Sciences at Cornell University, was in Central Asia with his research colleagues to begin their work with communities in the Pamir Mountains—a region of the world’s highest peaks that spans parts of Afghanistan, Tajikistan, Kyrgyzstan, and China.

For millennia, humans have tracked time and planned behavior to assure themselves of food based on seasonal indicators in their habitat—the first flowers to bloom, the arrival and departure of migratory birds, the start of the rainy season, the first day of frost.

“In a growing number of places around the world today,” says Kassam, “climate change is disrupting seasonal cycles and making such time-honored observations unreliable.”

Kassam climbing to the Vermoi, physical markers of an ancient ecological calendar for the villages of Savnob and Nisur in Tajikistan. Photograph: Tobias Kraudzun

A decade ago while conducting research in the Pamirs, Kassam learned from villagers that they were experiencing increased snow and glacier melt, higher river levels and flooding, changes in precipitation patterns, and changes in temperatures. The ecological timekeeping they had used for generations to track knowledge about their environment no longer could sustain their ways of living.

“Anxiety about how best to deal with unprecedented weather patterns was posing a survival challenge for small-holder farmers and herders,” he says.

New systems could help them recognize, interpret, and respond successfully to the climatic variability. New partnerships and science could help the communities develop innovative and reliable systems.

“These observational systems must be grounded in ecology, in social institutions, and in the cultural values of the people who will use them,” Kassam says.

“Our method of creating anticipatory capacity emerges directly from the ideas of the communities, and it encourages collaboration with people of different backgrounds, cultures, and ways of knowing.”

That is why he and his research team have been working in Afghanistan and other parts of the Pamir Mountains in Central Asia. Their plan: work with indigenous communities to document and analyze the villagers’ existing ecological calendars—including calendars of the human body. The researchers already have begun mapping out the seasonal cycles of these mountain communities by inviting villagers to identify the ecological indicators of changes in time that they personally use.

Calendars of the Human Body

​The ecological calendars at the center of the project in the Pamirs link environmental cues with corresponding body parts—a sort of mnemonic aid. Starting with their feet, villagers track each new sign of the seasons over time by pointing to a correlating body part, up to their head, signifying the end of spring, and back down again with the beginning of summer.

“Our goal is to revitalize ecological calendars across differing bioclimatic zones,” Kassam says, “and to work together to recalibrate and adapt them to the new conditions and variability brought by anthropogenic climate change.”

The research team—from the United States, Germany, Italy, and China—had spent a year and a half in developing an excruciatingly detailed agenda for their summer work. They coordinated across several countries with numerous colleagues, governing bodies, community leaders, partner organizations, institutions of higher education, local schools, and more. They had planned for speaking engagements to a varied group of audiences, guides and translators, technology and equipment for climate research stations, trainings for students and community researchers, meetings with local officials. They had outlined all the specifics: where they would meet, the villages they would visit, which mountain paths they would traverse, what to bring with them, with whom to speak in each location, what to say, what to ask.

There was much to be accomplished.

The project is based in participatory action research. “Our method of creating anticipatory capacity emerges directly from the ideas of the communities, and it encourages collaboration with people of different backgrounds, cultures, and ways of knowing,” Kassam says. “This work cannot be successful without the community members and their participation.” 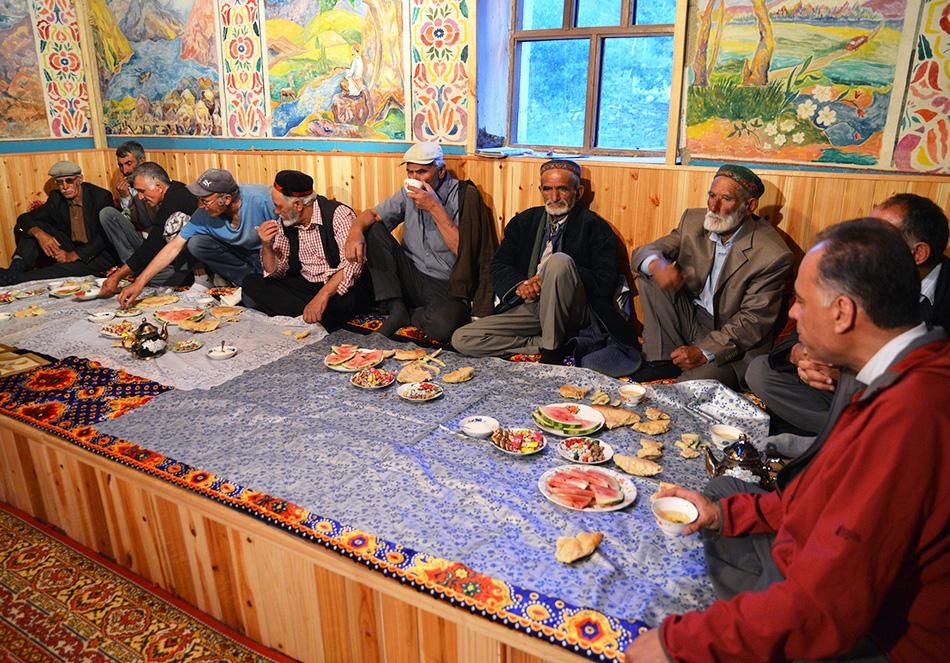 A first step: the research team hosts a meal with knowledge holders in the village of Savnob. Photograph: Tobias Kraudzun

The researchers are working with indigenous people from Pamiri villages in the Bartang Valley, Gorno-Badakshan, Tajikistan; the Alai Valley, Osh Province, Kyrgyzstan; the Shugnan Valley, Badakshan, Afghanistan; and the Tashkurgan Valley, Xinjiang, China.

On this trip, they planned to start their work in Afghanistan, then move on to Tajikistan and Kyrgyzstan.

The first day in Kabul, hosted by the Canadian Embassy, Kassam (a Canadian citizen) would present a video talk at the American Embassy to members of mountain cities in Afghanistan and Tajikistan. The next day he was scheduled to speak at the Canadian Embassy about ecological calendars—he would be introduced by Prince Mustafa Zahir, director of Afghanistan’s National Environmental Protection Agency. The audience would include members of the Afghanistan Parliament and ambassadors from Germany, Italy, China, and the United States, the countries of his research colleagues. The following morning Kassam would present a seminar on medicinal plants, and meet at the United Nations base in Faizabad with a research fellow from Cornell’s South Asia Program. These engagements would provide key stakeholders with the context for the team’s travel to the mountain communities for their unfolding work.

But before the speaking engagements could begin, kismet intervened.

While most of the city was fasting in observance of the holy month of Ramadan, a truck bomb devastated a central area of Kabul. More than 150 people were killed, more than 500 civilians were injured, and many more were traumatized. Kabul went into lockdown. Officials determined that it was not safe for Kassam and his colleagues to stay on in Kabul for the speaking engagements, or to travel to the Afghani mountain villages at this time.

Devastated by the human catastrophe in the city, Kassam watched their plans disintegrate. He was forced to change the team’s course—their work in Afghanistan would be postponed. (It has now been rescheduled for spring 2018.)

Instead, they headed directly to Tajikistan—Kassam, one Italian and two German research colleagues, two German students, and two Cornell students—to the capital Dushanbe and into the mountains to begin their collaborative work with the villagers in Savnob and Roshorv.

From Tajikistan, Kassam traveled across the Alai Mountains into Kyrgyzstan, a difficult journey because two of the common paths were blocked as the result of climate changes in the environment. Once in Kyrgyzstan, Kassam and several of the team’s climate science students worked to set up their research community in Sary-Mogol. Later, Kassam also traveled to Bishkek, where he met with representatives of GIZ, a German sustainable development agency that is a partner in the research project. 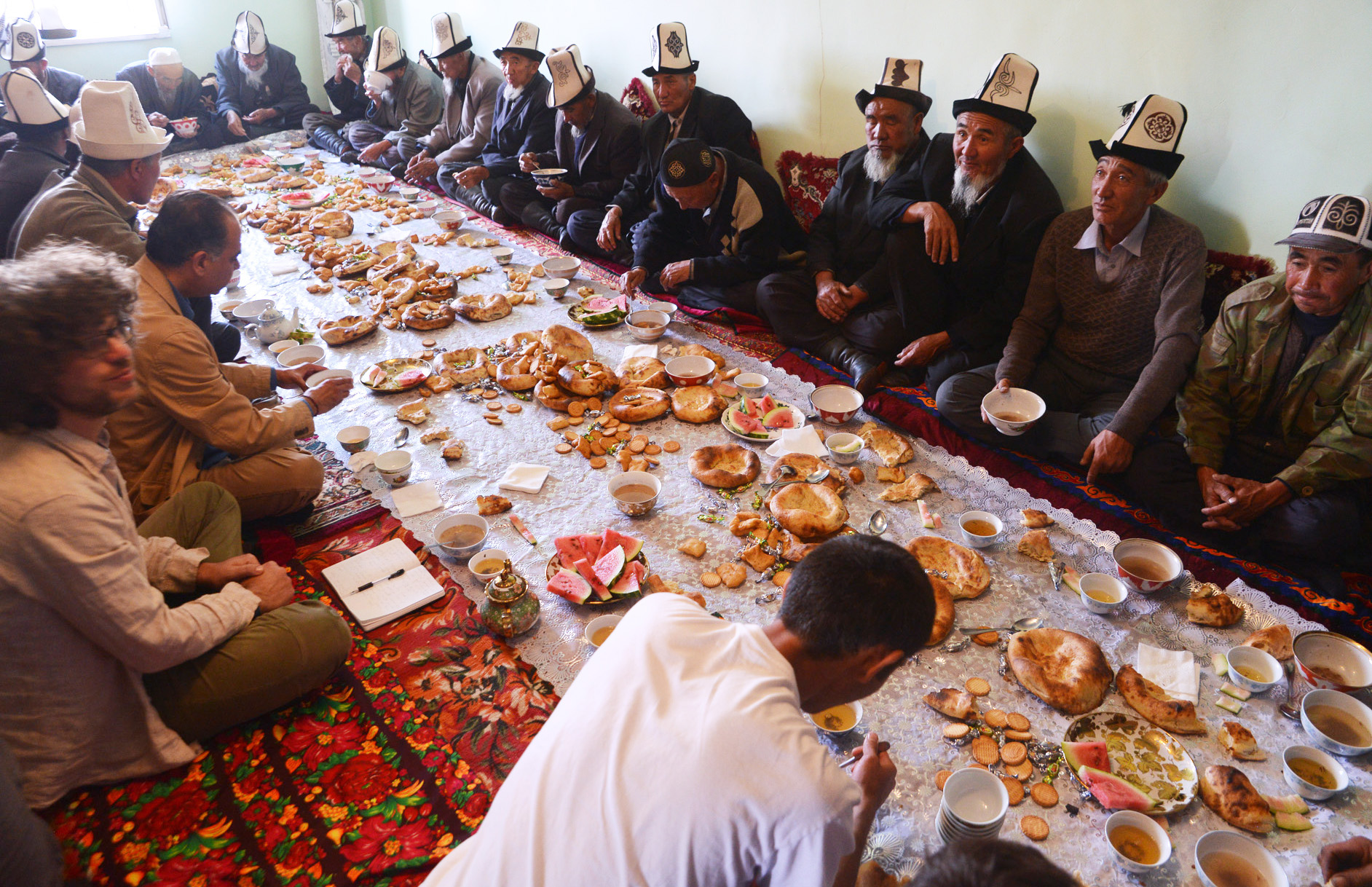 In each village, the team invited elders to join the project, hosted a community meal, and discussed the research. They conducted interviews with villagers, documenting existing ecological and biophysical cues for ecological calendars and human ecological mapping.

A meal with village elders in Sary-Mogul begins a partnership for the project. Photograph: Tobias Kraudzun

Fieldwork included maintenance of the climate research stations they had established—with replacement of one station hit by an avalanche—and downloads of data (temperature, humidity, wind speed and direction, radiation, soil moisture and temperature), as well as the mapping of vegetation for a time-series analysis of life cycles. 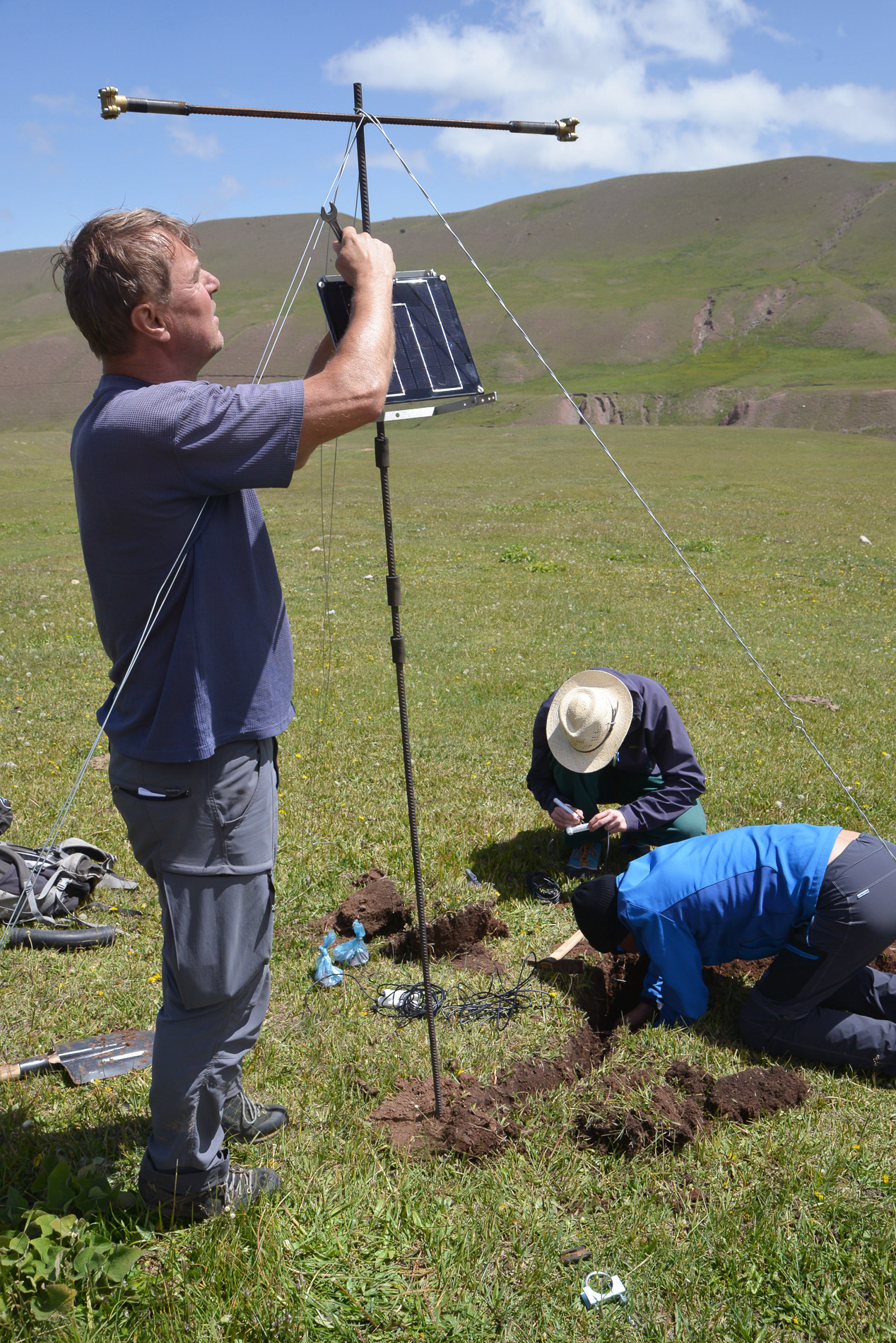 Kassam has experience from previous scientific work with indigenous communities in high-altitude and high-latitude locations across the globe, having begun nearly two decades ago working with the peoples of the Arctic—including the Alaskan, Canadian, and Russian Arctic and sub-Arctic.

With other faculty at Cornell, Kassam began field research for the ecological calendars project in 2015, first working with indigenous communities in North America—Dakota and Lakota people of the Standing Rock Nation—and non-indigenous rural community members in the Oneida Lake Watershed.

New funding has allowed the research group to expand their work into Central Asia, based on the concept that began when Kassam had first heard about the mountain villagers’ climate-related challenges on his earlier visits to the Pamirs. 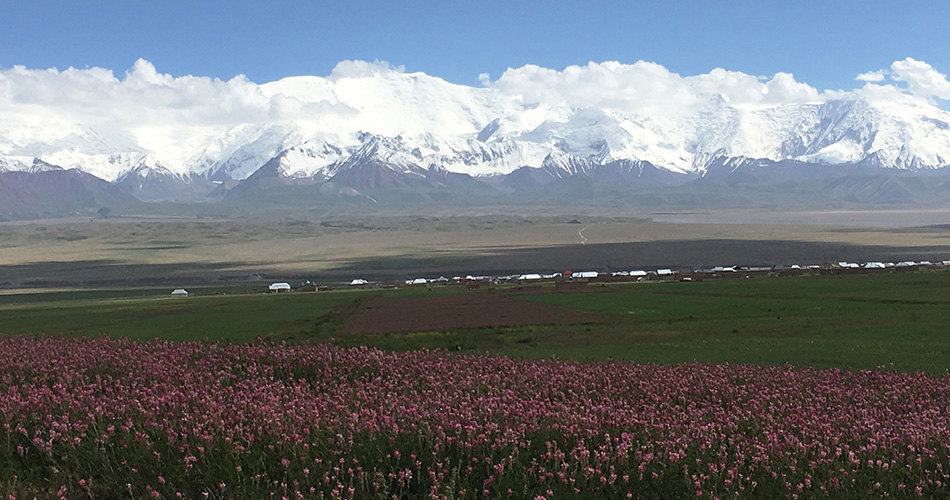 ​The village of Sary-Mogul in the shadow of the Pamir Mountains in the Alai Valley of Kyrgyzstan. Photograph: Karim-Aly Kassam

“In collaborations with indigenous people, we are generating a replicable model for ecological calendars,” says Kassam. “Through testing, we will establish a proof-of-concept for reliable ecological calendars in mountain societies, globally. Then we must assure that knowledge is never again lost—this can only be achieved in partnership with communities.”

“If we are successful, indigenous communities in the Pamir Mountains and across North America will regain their resilience and be able to secure their food systems and their livelihoods.”

The researchers plan to help the mountain communities share that knowledge among all the communities in different bioclimatic zones—this requires the research team to partner with community leaders, nongovernmental organizations, and civil society groups.

They also will help facilitate knowledge transfer between generations, so that children learn how to use and how to adapt the ecological calendars, and how to pass on that knowledge—this requires the research team to partner with local schools to develop curricula.

Why are these scientists tackling such a challenge?

“We are driven to create avenues of communication,” says Kassam. This is our job—we are scholars; we must deal in the truths that people are experiencing.” Furthermore, he explains, it is the fiduciary and ethical responsibility of Cornell University, as a land-grant institution, to use its resources to apply knowledge in service of public needs.

“If we are successful,” Kassam says, “indigenous communities in the Pamir Mountains and across North America will regain their resilience and be able to secure their food systems and their livelihoods.”