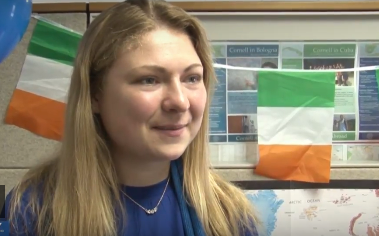 Bach thought she was going to a routine meeting with her Cornell Abroad advisor in Caldwell Hall.

Instead, she was greeted by the NYC-based representative of University College Dublin (UCD), who told her that she had won a full-tuition scholarship and free airfare for her study-abroad semester in Ireland this fall. The room, full of her friends and advisors, applauded their congratulations.

A sophomore studying chemical engineering, Bach won one of 26 scholarships awarded nationally by Go Overseas, an organization based in Berkeley, California. Bach was also selected to receive free roundtrip airfare for her study-abroad semester at UCD, courtesy of Aer Lingus.

“Cornell Abroad only had 48 hours to put together the surprise for Elizabeth, so we had to work hard and fast!” says Alayne Prine, Cornell Abroad program advisor for Ireland and the person who told Bach about the scholarship opportunity. For the past several months, she has helped Bach negotiate the logistics of her upcoming study abroad semester, including the differences in academic systems, cultural adjustments, the application process and living arrangements.

“Advising a student like Elizabeth, who is so passionate and hard-working, makes me happy and proud. Seeing her big smile makes it all worthwhile,” says Prine. “She’s going to have an incredible semester in Dublin. We look forward to sending more engineering students to UCD in the future.”

Bach is the first ChemE student (and only the second engineering student) to enroll in the UCD study abroad program, a long-standing partner of Cornell Abroad.

“Advising a student like Elizabeth, who is so passionate and hard-working, makes me happy and proud. Seeing her big smile makes it all worthwhile.”

Bach is interested in sustainable energy design. She says that she really wanted the opportunity to study at UCD because of its excellent reputation and its location. In the essay she wrote to apply for the scholarship, she says: “Dublin is the perfect location for my semester abroad because Ireland is one of the world leaders in alternative energy development, and Dublin is a home for many of the technology companies working on alternative energy solutions.”

“Dublin is one of the most inclusive and culturally diverse cities in the world—it will give me the opportunity to study with people from many different backgrounds and expose me to new perspectives and problem-solving approaches.”

“From leading engineering project teams at Cornell, I learned that success is more likely with open-minded collaboration,” she says. “Dublin is one of the most inclusive and culturally diverse cities in the world—it will give me the opportunity to study with people from many different backgrounds and expose me to new perspectives and problem-solving approaches.”

Bach is also of Irish descent, and fondly remembers a trip with her family to the Irish countryside when she was 13. She is looking forward to living in the country and learning more about her heritage.

Carol Casler, undergraduate student services coordinator for the Robert Frederick Smith School of Chemical and Biomolecular Engineering in Cornell’s College of Engineering, helped Bach structure her courses in a way that the UCD and Cornell curriculums would align. The school credits Paul Steen, Cornell’s Maxwell M. Upson Professor of Engineering, with playing an instrumental role in working with UCD colleagues to make the UCD program accessible to engineering students.

To make up the classes she will miss, Bach will spend summer 2017 on campus, taking nine credits worth of coursework toward her major.

“Elizabeth is a trailblazer,” says Casler. “If we can establish that UCD is a study abroad program that works with our curriculum, we’re hoping that other ChemE students will follow her.”