This LibGuide gathers books, videos, and other resources for understanding the injustices that gave rise to movements like Black Lives Matter, Say Her Name, and others.

When President Pollack declared Juneteenth a university holiday, we were asked to take the day to actively reflect on the role of structural inequalities, racism, and violence in our lives and work. Global Cornell staff and faculty came together after Juneteenth to have a discussion about inequality and discrimination. Nobody has all the answers and people are at different places in their relationship to this topic. We came ready to listen—and not to judge—and to think out loud together.

There are people of goodwill who haven't experienced racism. If it's not part of your everyday consciousness, there is a blindside. 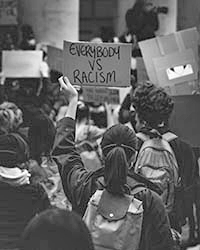 We often think that racism is about a person's behavior. Some people, we think, act in explicitly racist ways toward racial minorities. Those are the "real" racists, we tell ourselves. But racism is not merely a function of individual attitudes, and it can't be eradicated by changing hearts and minds. Racism is the social, legal, political, and economic distinctions that mark and maintain unequal access and entry points to privacy, property, protection, prosperity, and personhood. Racism is embedded in structures, institutions, and ideas, especially those about work, deservingness, representation, redistribution, and government's role.

It is hard to perceive what's to be like to be black in this country. How can you relate to this, if you've never spoken to your children about how you need to be careful about where you go and what you do?

Become more aware of the implications of your actions. 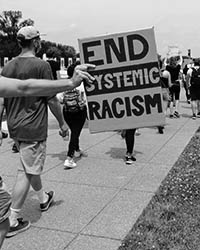 I encourage you to read about inequalities and prejudices that generally go unnoticed. For example, in the late 1800s, Cecil Rhodes made his fortune in the diamond trade in Africa. He gave large parts of his wealth to create college scholarships outside the continent. In 1902 Oxford named their famed Rhodes Scholar fund after this man, but it took until the 1970s for a black person to receive a scholarship.

Monrovia, the capital of Liberia—which translates to liberty—was named after James Monroe. He was the largest slave owner of his time. A movement is underway to rename the capital.

Renaming. Revisiting. Rethinking. If we do this, we can come through the other side, a better country and a better world.

Structural inequality exists. "Where are you from?" carries a presumptuousness in the question. Sounds innocuous, but it conveys different senses of belonging. Where are you really from because you can't be from here? 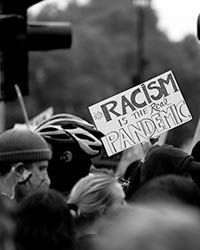 To be an antiracist, you have to dismantle structural inequality. It is reassuring that there is always an opportunity to be thinking, and daring, and doing better.

I want to stress the importance of intersectionality. Maybe you are black and a woman and a non-U.S. citizen—each carries its own load and are all interconnected.

What positions are we hiring for? Do the normal structure of universities, companies, and other organizations operate with a sense of fairness and justice? Changing structure is what is needed now.

Programs can make sure that history is learned and changes what happens next. We need programming to look deeply and go beyond conversation so that we won't have shallow tokens of change in the end. 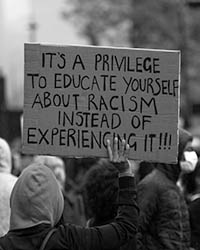 Get to know someone individually as a person. Start with not making assumptions about someone based on what you see with your eyes at the moment.

How have I got to where I am on the backs of a racially unjust system, and what can I do to think about that differently?

We need different perspectives, but a lot of conversations remain at the level of how one feels. It would be great if we could think about actions to move the conversation forward. There might not be consensus on steps to take, but I would like to make an explicit call for action. Programming is a critical component to educate and consider the many ways these issues affect our international students. We can make a difference with our actions on campus.

Be an ally, bring a different perspective, listen, allow space for feelings and experiences. Then move on to actionable items. Make university resources available to help fix the situation. We need to move from critical thoughts into action. 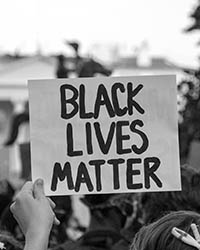 It's about representation, support, and modeling of what higher education looks like, what higher ed expresses, and that comes through financial support for specific communities.

There is a mental framework that looks at the world as a disposable commodity. People who are different from you are part of that disposability. That is why their humanity is unseen, and they can be mistreated. Race, environment, sexuality–all are part of the world being disposable. We need to recognize that we are all intrinsically connected and valuable and are responsible for saving the planet and everyone on it.